How do we decrease the number of unnecessary biopsies and improve detection of life-threatening cancers?

Screening for prostate cancer is controversial. While the United States Preventive Services Task Force (USPSTF) recommends against screening, other organizations including the American Urological Association (AUA), American Cancer Society (ACS), National Comprehensive Cancer Network (NCCN) and American College of Physicians (ACP), recommend informing men of the risks and benefits of early detection. There are men at higher risk (African-Americans and men with a family history of first or second degree relatives with prostate cancer) of developing prostate cancer. Importantly, African- American men have a higher risk of mortality from prostate cancer.

Guideline Statement 2: The Panel does not recommend routine screening in men between ages 40 to 54 years at average risk. (Recommendation; Evidence Strength Grade C)

Guideline Statement 3: For men ages 55 to 69 years the Panel recognizes that the decision to undergo PSA screening involves weighing the benefits of preventing prostate cancer mortality in 1 man for every 1,000 men screened over a decade against the known potential harms associated with screening and treatment. For this reason, the Panel strongly recommends shared decision-making for men age 55 to 69 years that are considering PSA screening, and proceeding based on a man’s values and preferences. (Standard; Evidence Strength Grade B)

Guideline Statement 5: The Panel does not recommend routine PSA screening in men age 70+ years or any man with less than a 10 to 15 year life expectancy. (Recommendation; Evidence Strength Grade C)

The American Cancer Society (ACS) recommends that men have a chance to make an informed decision with their health care provider about whether to be screened for prostate cancer. The decision should be made after getting information about the uncertainties, risks, and potential benefits of prostate cancer screening. Men should not be screened unless they have received this information. The discussion about screening should take place at:

After this discussion, those men who want to be screened should be tested with the prostate-specific antigen (PSA) blood test. The digital rectal exam (DRE) may also be done as a part of screening.  If, after this discussion, a man is unable to decide if testing is right for him, the screening decision can be made by the health care provider, who should take into account the patient’s general health preferences and values. Assuming no prostate cancer is found as a result of screening, the time between future screenings depends on the results of the PSA blood test:

Because prostate cancer often grows slowly, men without symptoms of prostate cancer who do not have a 10-year life expectancy should not be offered testing since they are not likely to benefit. Overall health status, and not age alone, is important when making decisions about screening.

Even after a decision about testing has been made, the discussion about the pros and cons of testing should be repeated as new information about the benefits and risks of testing becomes available. Further discussions are also needed to take into account changes in the patient’s health, values, and preferences. 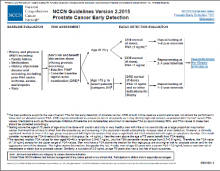 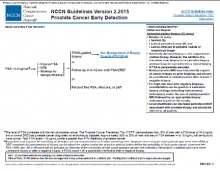 Screening for Prostate Cancer: A Guidance Statement From the Clinical Guidelines Committee of the American College of Physicians

Who developed these recommendations?

The Clinical Guidelines Committee of the American College of Physicians (ACP) developed these guidelines. ACP is a professional organization for internal medicine doctors, who are specialists in adult care.

What is the problem and what is known about it so far?

A blood test that measures prostate-specific antigen (PSA) levels can find prostate cancer before symptoms develop. If the PSA level is high, a prostate biopsy may be needed to see whether cancer is actually present. A biopsy is a procedure that is done to obtain a piece of the prostate for examination.

How did the ACP develop these recommendations?

The National Guideline Clearinghouse (NGC) is a database developed by the U.S. government to make clinical guidelines widely available. The authors searched the database for U.S. guidelines about prostate cancer screening with PSA. They evaluated each guideline using a published instrument that considers 23 standard criteria for the quality of guidelines and rated each guideline from 1 (worst) to 7 (best).

What did the authors find?

They conclude that PSA is not just a blood test. It can open the door to more testing and treatment that a man may not want or that may harm him. Because chances of being harmed are greater than chances of benefiting, each man should have the opportunity to decide for himself whether to be screened.

What does the ACP recommend that patients and doctors do?

Doctors should not screen for prostate cancer using PSA unless patients express a clear preference for screening after discussion.

Doctors should not screen using PSA in average-risk men younger than 50 years or older than 69 years, or any man with a life expectancy less than 10 to 15 years.

What are the cautions related to these recommendations?

These recommendations apply to men at average risk for prostate cancer who do not have symptoms that could be caused by prostate cancer. The authors did not consider non-U.S. guidelines.