The prostate is a gland found in men at the base of the bladder surrounding the urine outflow channel (urethra). 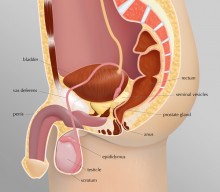 In an attempt to diagnose prostate cancer early, while it is confined to the prostate gland, screening is performed either by a primary care provider or a urologist. This is necessary because early, organ-confined prostate cancer is almost always asymptomatic. Advanced prostate cancer may present with bone pain, difficulty with urination or blood in the urine.

There are several known factors which increase the risk for prostate cancer:

While prostate cancer screening recommendations vary between the American Cancer Society (ACS), the American Urologic Association (AUA), and the National Comprehensive Cancer Network (NCCN), in general it is felt that prostate cancer screening should start between 40 and 50 years of age. Men who are at a very high risk with multiple risk factors should start screening annually at age 40. Men with one risk factor are considered to be at moderate risk and should be screened every 2-5 years starting at age 40. Men without any risk factors can start annual screening at age 50. It is recommended that screening stop once men reach 75 years old, or have a life expectancy less than ten years.

Screening involves a blood test to check the prostate specific antigen (PSA) level and a digital rectal exam (DRE) in which a physician places a finger in the rectum and feels the prostate, looking for irregular areas or nodules in the prostate gland which may represent cancer. The exam takes only a few seconds. The PSA blood level can be influenced by multiple factors, so an elevated PSA does not necessarily mean that prostate cancer is present. Additionally, the PSA may be within normal and there could still be cancer present detected by DRE alone. The table below shows race and age-adjusted data for ‘normal’ PSA.

Elevated PSA can occur for many reasons and does not necessarily mean that prostate cancer is present. PSA can be elevated above the race and age-adjusted limits in men with recent sexual activity or prostate manipulation, prostate infection, a large prostate, or prostate cancer. If the PSA is elevated without any obvious reason, like infection, a prostate biopsy is often recommended to rule out cancer as the cause for elevation. Prostate biopsy is also recommended if a suspicious nodule is felt during a DRE.

Prostate cancer cannot be definitively diagnosed unless a prostate biopsy is performed. This is a procedure done in a urologist’s office. An ultrasound probe (a little bit bigger than the size of one’s thumb) is placed into the rectum and under ultrasound-guidance, a small needle is used to take samples of different areas of the prostate gland. Prior to taking any biopsy samples, local anesthetic is injected at the base of the prostate to minimize discomfort. This procedure is generally well-tolerated and can be successfully done in clinic to avoid the unnecessary risks of general anesthesia.

There are risks involved with a biopsy of the prostate. The most common side effects include blood in the urine, stool, and ejaculate (30-60%). These symptoms are normal and expected after this procedure. Persistent bleeding requiring intervention occurs in less than one percent of patients and almost only in patients on blood-thinning medications like aspirin, Plavix or Coumadin. Major side effects do occur but are rare. Serious infection (0.6%) and urinary retention (1.2%) are the most concerning. Transient fevers can occur in about 6% of patients.

In order to minimize the risks of the procedure, patients should usually stop taking blood thinning medications one week prior to biopsy. They are also prescribed oral antibiotics and an enema the morning of the biopsy. If the patient develops urinary retention (inability to urinate), a catheter may be placed in the bladder for a few days until the swelling of the prostate goes away.

After the biopsy, patients should refrain from sex for a few days, but otherwise can resume normal daily activity the next day. It takes about five to seven days to get the biopsy results back.

Once the biopsy results are available, the patient will return to clinic to discuss them with their urologist. If the results are negative, the patient will resume annual screening with DRE and PSA. If they are positive, the physician will discuss the aggressiveness of the cancer. The physician may also recommend imaging studies, like a CT scan or a bone scan. They will also discuss which types of treatment are appropriate for that type of cancer.

If a patient’s prostate biopsy comes back as positive for cancer, the patient is then placed into a risk category: low, intermediate or high. The risk category is determined by the biopsy results, the PSA and the DRE.

Patients should know into which risk category they fall, but it is not necessary to understand how that risk is determined. For those who are interested, the following paragraphs explain risk stratification.

The aggressiveness of prostate cancer is determined by several factors: Gleason score, PSA and clinical stage. Based on these factors prostate cancer can either be classified as low, intermediate or high risk.

The last determinant of risk is the clinical stage. Clinical staging is determined by the method of detection (DRE vs. PSA) and other imaging, if felt necessary by the urologist. Prostate cancer is staged as is seen in Table 2.

Table 2: Staging of Prostate Cancer with Associated RiskOnce PSA, Gleason score, and clinical staging have been completed, risk can be assigned. A summary of the risk stratification is in Table 3.

Once again, it is not necessary for a patient to be able to understand how to determine their own risk, but they should know their risk classification, as their risk will influence which therapies will be recommended. It is important for the patient to discuss with his physician if there is a need for additional tests to check for “cancer spread”. Men with low risk cancer DO NOT REFQUIRE ADDITIONAL TESTS as the risk of cancer spread is very minimal. For patients who fall into intermediate or high risk groups, the urologist may order a bone scan, CT scan, or chest X-ray to evaluate for spread of cancer to the bones, lymph nodes, or other sites.

There are many options for treatment for prostate cancer. There is no ‘right’ treatment; the decision should be individualized after discussion with a patient’s doctors and family. This section provides a brief summary of each treatment modality with the pros and cons.

Side effects from prostate surgery include immediate erectile dysfunction and urinary incontinence. Urinary incontinence occurs because of damage to the nearby muscles that control urinary function. All patients should expect to have some leakage after surgery. Within four months of surgery, about 70% of patients no longer require incontinence protection; one year after surgery, that number rises to 90%. Patients who continue to have leakage can undergo several different therapies, including physical therapy exercises and surgery, to help this resolve.

The nerves that control erectile function are microscopic and run on the edges of the prostate. Surgery can be individualized to try and spare the nerves; however, due to their microscopic size and proximity to the prostate, minor injury cannot be avoided. In patients with higher-risk disease or disease known to be located near these nerves, nerve-sparing procedures are not recommended. Erectile function continues improve up to two years after surgery. Even though erectile function is expected to decrease after surgery, therapies like oral medications, vacuum devices, penile injections and even further surgery can be tried to achieve satisfactory erectile response.

In contrast with radiation therapy, erectile dysfunction and urinary incontinence are seen immediately after surgery. In addition to erectile dysfunction and urinary incontinence, other known side effects could include incomplete resection of tumor requiring subsequent radiation, urine leak, pelvic bleeding, and bladder neck contracture (scarring at the connection between the urethra and bladder). Surgical removal of the prostate can either be done “open”, with a midline incision from belly button to the pubic bone, or “robitically-assisted laparoscopy, with five to six smaller incisions across the abdomen. There is no evidence to date that cancer-control is better with one type of procedure or the other.

There are different forms of radiation that can be used depending on prostate cancer risk:

A formal consult with a radiation oncologist should be obtained in order to discuss radiation options. External beam radiation therapy involves delivering daily treatments to the prostate for approximately 8 weeks. Brachytherapy involves placing radioactive seeds into the prostate. These seeds dispense radiation to the prostate over one to seven months. Temporary implant involves placing needles in the prostate and delivering a blast of radiation and then taking the needles out. Brachytherapy can be used alone for low risk cancer or in combination with external beam radiation with or without hormone ablation therapy in intermediate or high risk cancer. Newer forms of radiation therapy: Proton Beam Radiation and Hypofractionation Radiation Therapy are currently under investigation.The advantage of radiation is that it is less invasive than surgery and side effects like erectile dysfunction are delayed. Drawbacks include erectile dysfunction, bladder irritation (chronic and severe in

Also known as hormone ablation therapy, ADT blocks production of testosterone and/or blocks the testosterone receptor in the prostate. Since prostate cancer usually requires testosterone to grow, these medications can block the growth of prostate cancer. Medical oncologists sometimes are consulted to help administer this therapy, although many urologists administer it as well. This medication is typically given every 3-4 months as a subcutaneous injection in the stomach. The same results can also be achieved surgically with removal of the testosterone-producing tissue in the testicles.

In patients who have primary treatment and then experience a recurrence (ex a PSA rise), ADT is considered first line therapy once surgery and radiation are no longer options. ADT is also used for known metastatic disease. Short term side effects include hot flashes and gynecomastia (swelling and tenderness of breast tissue). Long term complications include increased risks of diabetes, cardiovascular disease, anemia, sexual dysfunction, and osteoporosis.

There are other therapies for prostate cancer such as High Intensity Focused Ultrasound (HIFU), proton beam radiation therapy, and others. These are often promoted as less invasive and equally effective with fewer side effects. However, because these therapies are relatively new, long term data is not available to truly assess their efficacy or side effects profiles. Because of these unknowns, these treatments are not considered the gold standard therapies that surgery and radiation are considered to be.

Once a patient under goes initial treatment for his prostate cancer, the PSA should become undetectable or at least drop significantly from the pre-treatment value (expectations vary depending on the treatment modality). The patient must then undergo continued surveillance for prostate cancer recurrence. This surveillance is most often accomplished with annual PSA testing. Patients with low-risk disease have a lower risk of recurrence; patients with intermediate- and high-risk disease are at increased risk of recurrence.

A PSA rise, known as ‘biochemical recurrence’, may require further treatment. Further treatment can also be warranted if a patient develops radiographic evidence of cancer spread. The type of treatment recommended depends on the extent of recurrent disease, and on the treatments already administered. Androgen deprivation therapy is often indicated at this time.

If the PSA is seen to rise in spite of ADT, the cancer is said to be ‘castrate-resistant’. In this case, there are newer medications that may control the cancer for long periods of time. At present there are two chemotherapy medications: Taxotere and Cabazitaxel, an additional hormonal medication (second-line hormone) with Abiraterone Acetate and a vaccine, Sipuleucel-T.

To be the reliable source of prostate cancer information that is accessible to patients, advocates, physicians, care providers, researchers, and Florida's governing officials.

To improve the outcomes and reduce the ethnic/racial disparities related to prostate cancer.